Arabtec to Expand to Iraq

Arabtec Holding PJSC has announced its intention to open an office in the Iraqi capital, Bagdad, to capitalize on the country’s high potential, particularly in oil and gas and infrastructure.

The opening of Arabtec’s office in Baghdad to facilitate the company’s planned growth in the Iraqi Market is in line with the Company’s business growth strategy to diversify into higher-margin segments, particularly infrastructure and oil and gas.

The office will serve as a platform for expansion by Arabtec Holding’s joint ventures and subsidiaries, in what is expected to become the the region’s most lucrative construction market. Arabtec is already in advanced discussions with a number of clients in Iraq for large-scale projects in its target sectors 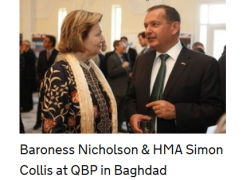 Baroness Emma Nicholson of Winterbourne has been appointed as the new Trade Envoy for the United Kingdom to Iraq.

Baroness Nicholson was personally appointed by the Prime Minister to act on behalf of the British Government to increase trade and economic co-operation between the United Kingdom and Iraq.

More than [37] billion dollars, the volume of investment in Kurdistan

Kurdistan Regional Government announced that the volume of investment in the region amounted to more than [37] billion dollars.

A statement of the provincial government received by all of Iraq [where] a copy of the source in the form of investment Kurdistan say that “the volume of investment in the region now stands at more than [37] billion dollars, an increase of over 100% compared to 2012.”

Decided to CBI, on Thursday, lifting the trusteeship imposed by the Warka Bank since 2012 to find work since 2010, and specialize in what was described the decision as “good financially,” Daian government to “maintain the financial situation in the country.”

A source at the Central Bank in an interview with the (long-Presse), “The bank decided, today, lifting the trusteeship, which was imposed on the Warka Bank since 2012,” noting that “the central bank impose a trusteeship after tumble work of the bank in 2010.”

Electricity: production of energy in the Middle Euphrates more than [3] thousands of megawatts

The electricity Ministry announced the arrival of electric power production in the Middle Euphrates more than 3,000 megawatts. A spokesman for the Ministry of electricity-the teacher who received all Iraq in “production plants of electricity Directorate in the Middle Euphrates arrived [3060] megawatts.”The teacher added that production would increase in the coming days after the completion of maintenance and rehabilitation of some units, despite the low pressure gas to natural gas stations. The electricity Ministry said 29 of last month near processing citizens [24] hours from the mains after entering production plants and linked to the national grid system.

It said in a statement that the Ministry “will of citizens [24] hours of electricity as of next week [last week] after the increase in the processing [12] hours,” adding that “the production system was [12100] megawatts, while total energy demand [viewed] megawatts.” over

Electricity may overflowing the need for Iraq